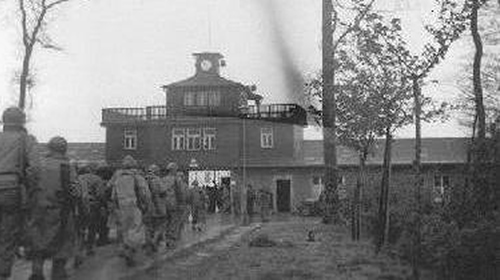 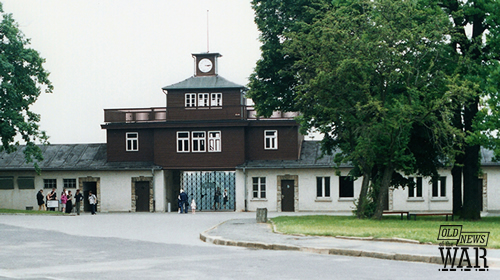 The gate house of Buchenwald Concentration Camp was among the first constructions built by the prisioners 1n 1937. Its general design and function catered for the camp of between 6.000 and 8.000 prisioners, as foressen at the beginning.
The building served as the main watchtower and camp prision. The office rooms of the SS ossicers in charge of the daily routine of the prisioners were located in the eastern wing.
Buchenwald was located at the top of the Ettersberg hill, 8 km from Weimar, in the current state of Thuringia. It went into operation in 1937 to concentrate individuals considered “enemies of the Reich”: Communists, Jews, Jehovah's Witnesses, Homosexuals and Gypsies. Throughout its existence it received 280 thousand prisoners. Of these, about 56,000 were killed.
On April 11, the day that the Americans in the 3rd US Army released the camp, there were only 21,000 prisoners left (including 900 children), most of them in cadaveric condition.
The clock on the tower still remembers the time when the camp was liberated, putting an end to the terrible suffering of the survivors. It was three-fifteen in the afternoon on April 11, 1945!
The photo to the side shows American soldiers entering the main gate of the camp after canceling the small German resistance that was still present.
The building remains true to what it was in the 30/40 decades of the last century.
Old Photo: Signal Corps 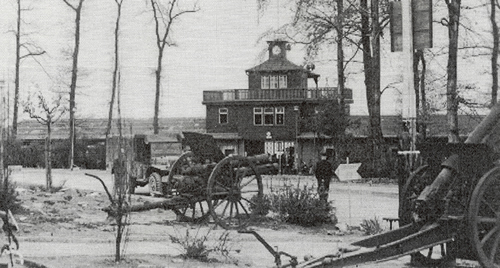 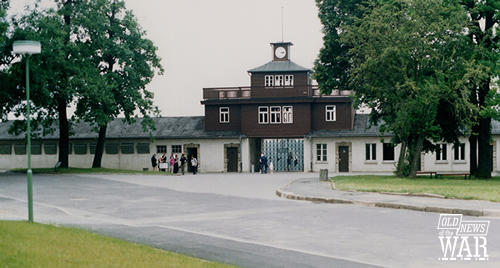 In this new photograph of the same location, you can see the remains of the battle around the main gate.
It was in Buchenwald that Ilse Koch "Witch of Buchenwald", wife of Karl Otto Koch, first commander of the camp, used the tattooed skin of the prisoners to, among other things, make lampshades and paintings domes. In 1951, after procedural comings and goings, Ilse was sentenced to life in prison, but committed suicide on September 1, 1967.
Buchenwald also served as a center for experimentation with Nazi medicine, subjecting prisoners to even greater suffering from the inoculation of disease. These experiences, in the vast majority of times, ended with the death of the prisoner.
After the end of the war, the camp was used by the former Soviet Union, which in turn kept 28,000 prisoners of war there. Seven thousand died of disease and starvation.
Old Photo: Signal Corps 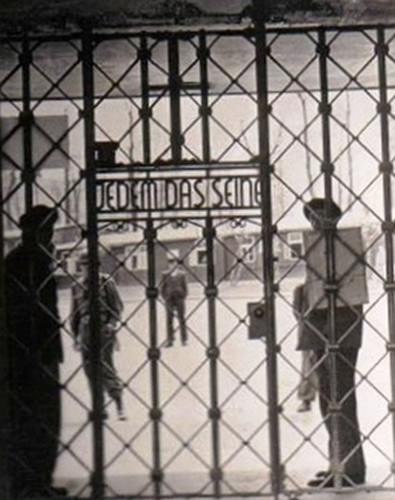 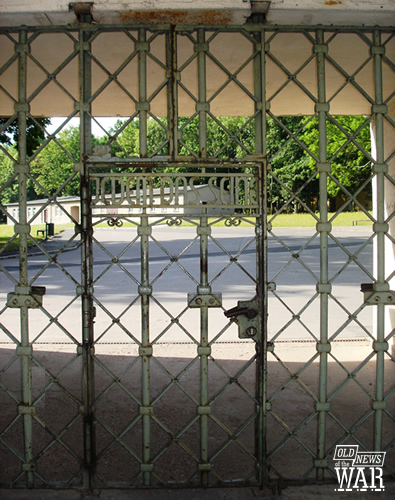 Unlike most other Nazi concentration camps that displayed the inscription "Arbeit Macht Frei" ("Work liberates) at their entrance gates, in Buchenwald it read:" Jedem Das Seine "(" To each one what is his ").
The gate was preserved and is still installed under the building at the main entrance to the camp, where the jail and the office of the officer in charge of the calls operated. 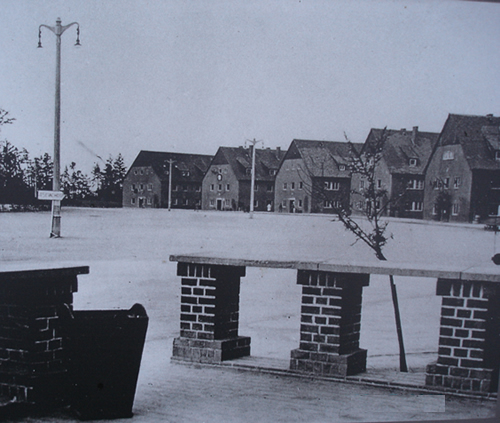 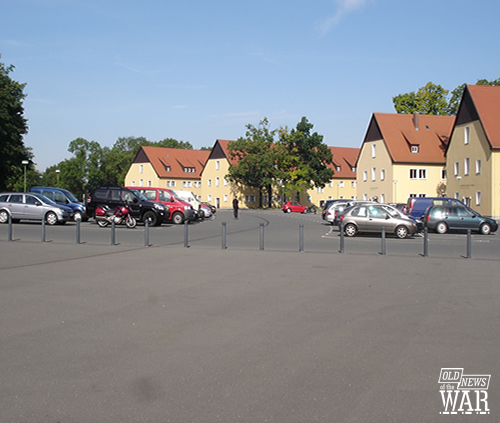 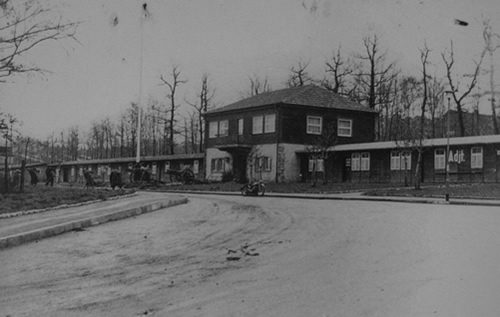 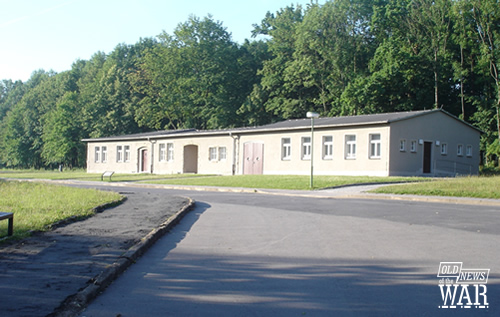 Buchenwald Concentration Camp Command headquarters building. Inside, in addition to the Commander's office, the SS office, the Political Department, and those who shared responsibility for administration, registration, forced labor, hygiene, mistreatment and consequent deaths of people detained in the camp also functioned.
The building, as well as others that existed around it, on the “Caminho Caracho”, was badly damaged during the August 1944 air raid. Only part of it was preserved. It corresponds to the central part of the old command building.
Camp commanders were: Karl Otto Koch, from 1937 to 1941, executed by the SS in 1945, and Hermann Pister, from 1942 to 1945, who despite being sentenced to death in 1947, suffered a heart attack and died before the sentence was carried out. 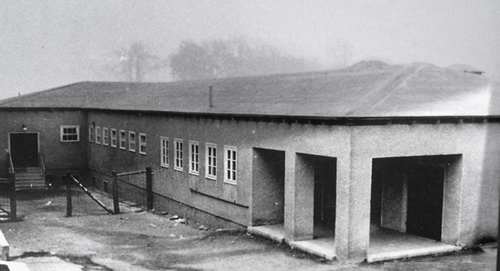 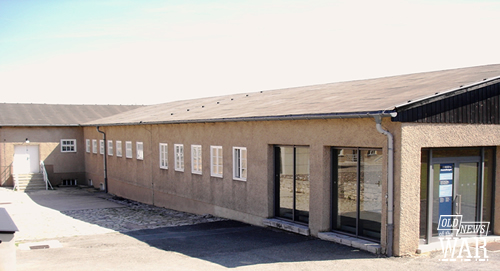 "Disinfection" buildin.Photograph taken in 1943 and the most recent in 2008.

Two basic differences between them: The small covered area at the entrance to the building was closed with a door and two glass windows;
The roof was renovated and lost its original design. 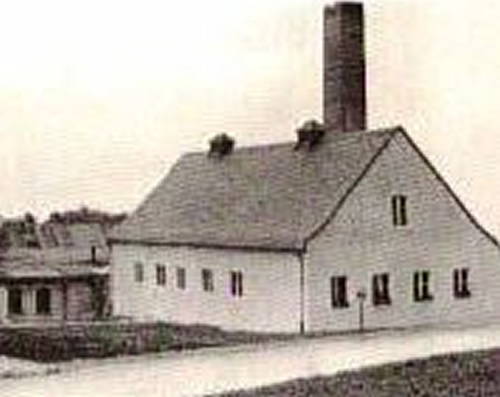 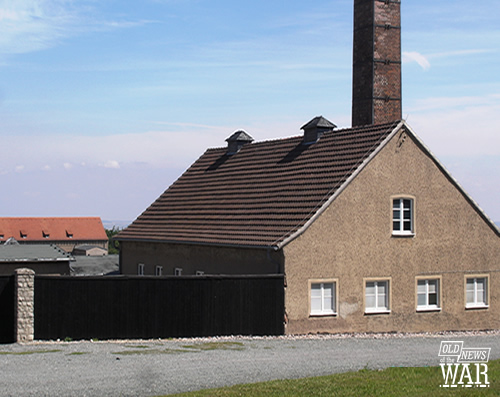 Although Buchenwald was not an extermination camp as were Auschwitz, Majdanek, Treblinka, Sobibor, Belzek and Chelmno, it also had its own crematorium.
It was inside this house, in the six ovens specially built for this purpose, that the bodies of prisoners who succumbed to hunger, cold, illness, medical experiences, beatings, mistreatment and executions were consumed.
In the basement of the building there is a large room where the bodies were temporarily "stored". In this room there are hooks on the walls that served to hang prisoners when in punishment, as if being in Buchenwald was no longer enough punishment!
The oldest photograph still does not show the wall that was built even during the time that the camp functioned.
The entire installation of the house has been completely preserved. 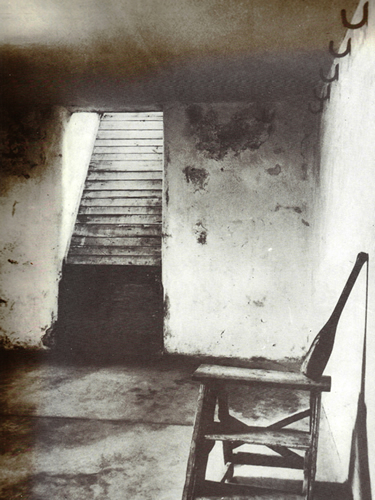 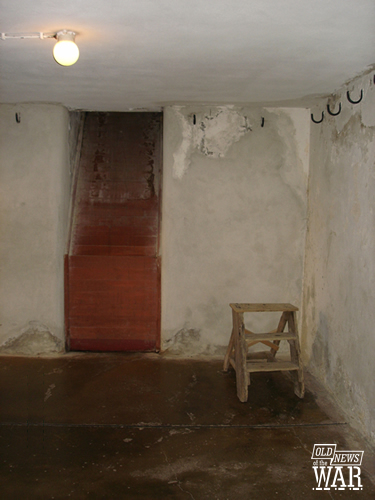 Basement of the crematorium.
Room where the hooks were fixed on which some prisoners were punished, hung by the hands tied behind their backs.
This room was also used as a "deposit" for bodies waiting for cremation.
Old Photo: NARA 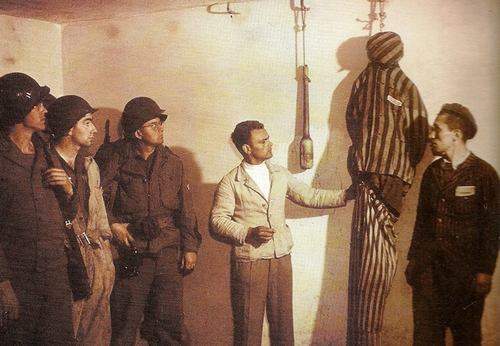 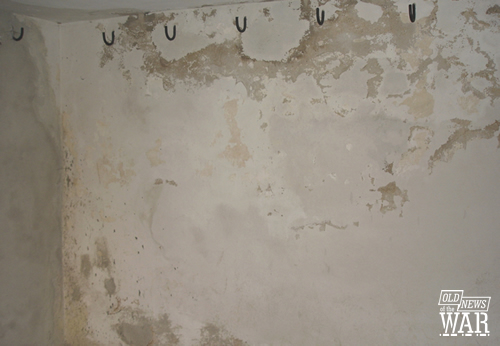 April 18, 1945, in the same location as the previous photograph. American soldiers watch a demonstration of how prisoners were punished.
According to the testimony of a Buchenwald survivor, my late friend Joseph Nichthauser, the walls painted with lime dye were scratched by the nails of the unfortunate people who were trying to relieve the pain in their shoulder joints.
As if the torture of being hung by the hands tied behind his back was not enough, the prisoner was still beaten with blows from the wooden cudgel, hung between the speaker and the mannequin.
The marks of suffering imprinted with the nails of the punished prisoners can no longer be identified. From the end of the war to the present day, the room must have been painted several times, which, in fact, erased the scars of history.
Old Photo: NARA 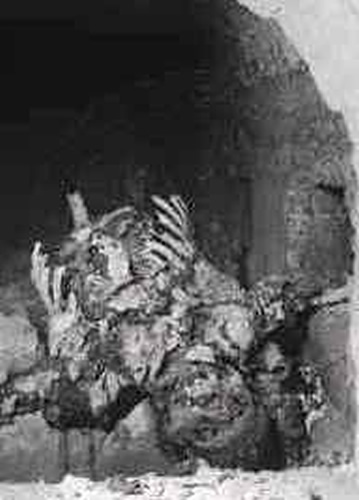 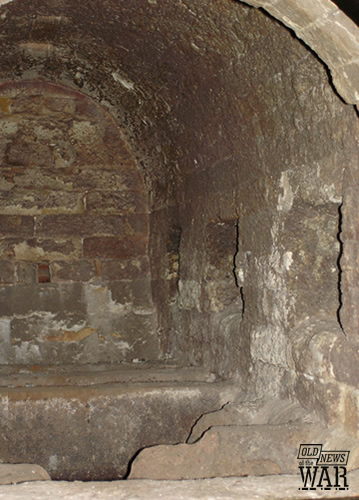 Human remains not yet fully consumed by the crematorium at the time of the liberation of the Camp by the American army.
This bone, as well as others found, were buried nearby with the respect they deserved. The ovens remain as a memory of all who were sacrificed in the Nazi concentration camps, and warn that this will never happen again.

April 18, 1945.
Beside the fence that separates the crematorium's facilities from the rest of the camp, a prisoner shows a pile of human ashes taken from the ovens. In his hand a piece of bone.
The fence remains in place, but the wood has been replaced.
Old Photo: NARA 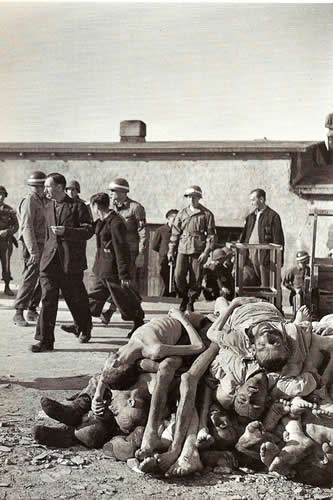 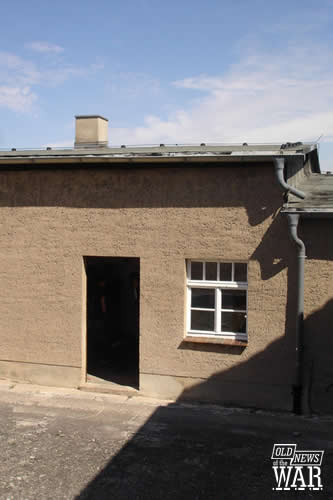 After the liberation of the camp, the population of Weimar, just 8 kilometers away, duly escorted by military policemen, was forced to witness all the bestiality promoted by Nazism in Buchenwald.
Committees of allied parliamentarians were invited to testify to the facts found there, and wrote a hard-hitting report that was widely disseminated throughout the world.
Old Photo: Time-Life 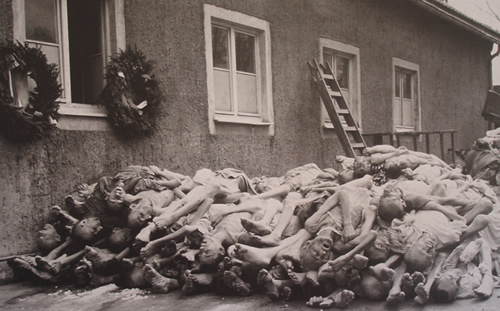 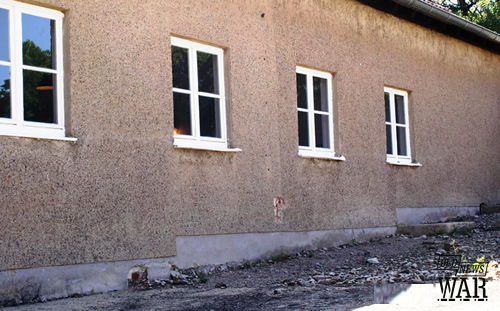 Dozens of bodies piled in the outer courtyard of the crematorium building.
After the arrival of the Americans, wreaths were hung to honor the victims.
The place has hardly changed, except for the windows. 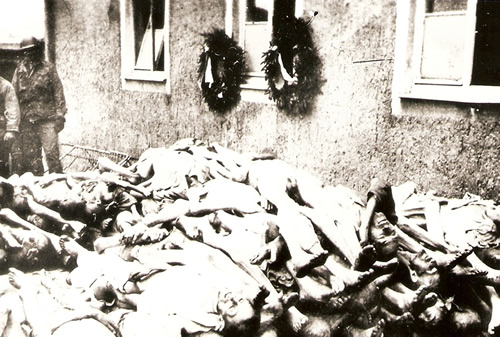 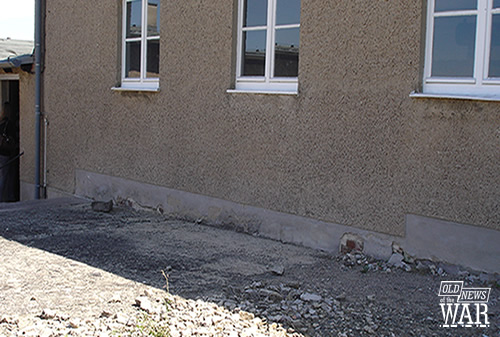 Same caption as the previous photo. 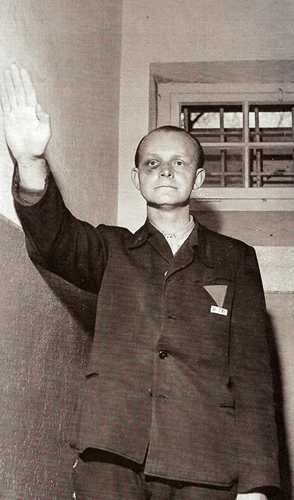 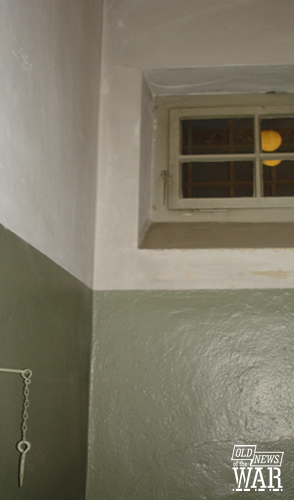 Even after being beaten and arrested by camp inmates in one of the cells of the entrance building, a few days after the arrival of US troops, capo Klaus Horning, with his right black eye, still insists on giving the Nazi salute as a form of provocation.
Old Photo: Lee Miller Archives