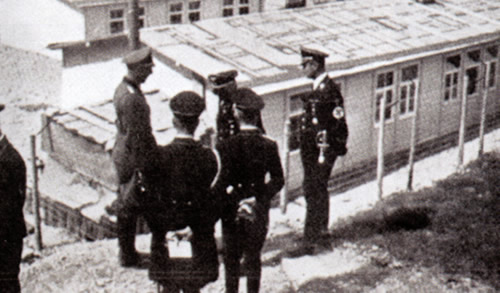 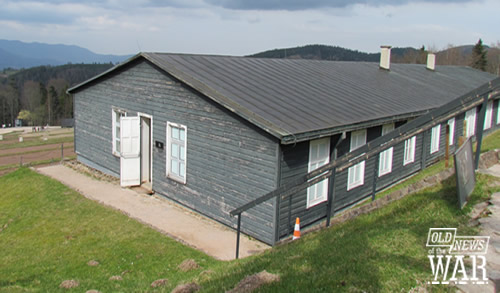 The Germans established the Natzweiler-Struthof concentration camp near Natzweiler, about 50 kilometers from Strasbourg, the capital of the province of Alsace. Until their construction was completed in May 1941, prisoners slept in the old Hotel Struthof, hence the name Natzweiler-Struthof. The camp contained about 1,500 prisoners who worked in nearby granite quarries, in construction projects and in maintaining the camp.
From the summer of 1943, the Germans arrested many "Night and Fog" prisoners in Natzweiler-Struthof. The "Night and Fog" operation (Nacht und Nebel) represented a German attempt to subdue the growing anti-German resistance in Western Europe. Resistance suspects were arrested and their families were not notified; the prisoners simply disappeared in the "night and fog". Many prisoners in the Natzweiler-Struthof camp were members of the French resistance.
In August 1943, a gas chamber was built in Natzweiler-Struthof in one of the buildings that formed part of the hotel complex. The bodies of more than 80 Jewish prisoners gassed at Natzweiler-Struthof were sent to the Institute of Anatomy at the University of Strasbourg. There, anatomist Dr. August Hirt assembled a large collection of Jewish skeletons in order to establish Jewish "racial inferiority" through anthropological study. The gas chamber was also used in pseudo-scientific medical experiments involving poison gas. The victims of these experiences were mainly the Roma who were transferred from Auschwitz. The prisoners were also subjected to experiments involving treatment for typhus and yellow fever.
In 1944 prisoners from the entire Natzweiler-Struthof camp system came to be used as forced workers in the production of weapons.
There were about 50 subcamps in the Natzweiler-Struthof field system, located in Alsace and Lorraine, as well as in the adjacent German provinces of Baden and Wuerttemberg. In the fall of 1944, there were about 7,000 prisoners in the main camp and more than 20,000 in the subcamps.
As the Allied forces approached in September 1944, SS authorities evacuated the main camp at Natzweiler-Struthof and distributed the prisoners among their subcamps. In March 1945, the Germans dissolved the subcamps and sent most of the prisoners on forced evacuation marches over long distances and under brutal conditions to the Dachau concentration camp in southern Germany.
From May 1941 to March 1945, between 19,000 and 20,000 people died in the Natzweiler-Struthof camp system.
In the photograph opposite, the only one known, taken during the time the camp was in operation, appear Himmler (in the center), Fritz Hartjenstein (successor to Josef Kramer. He was last commander of the camp) and other SS officers.
The comparison of the photos is not very good because original barrack was destroyed in a fire in 1976. Other barracks were suppressed.
Old Photo: United States Holocaust Memorial Museum 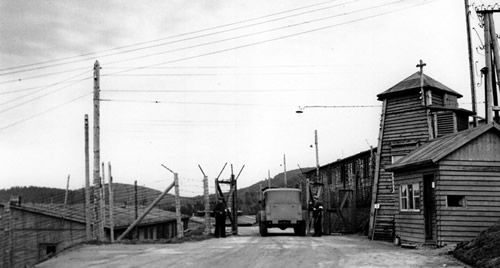 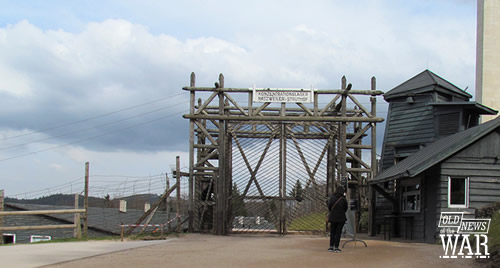 The Natzweiler camp operated until the beginning of September 1944, when prisoners and guards were evacuated to Dachau. After more than three years of operation, the nearly 7,000 remaining prisoners in the camp were forced to carry out a Death March to Germany, while a small SS garrison continued to handle the remaining operations. On November 23, 1944, it was the first camp discovered and released by the Allies in Western Europe.
In the photograph opposite, two members of the French Resistance, on guard at the main gate of the camp, receive an allied military vehicle.
The entrance to the camp was preserved exactly as it was. A wooden log portal was built on it, where a plaque with the name of the field was installed. 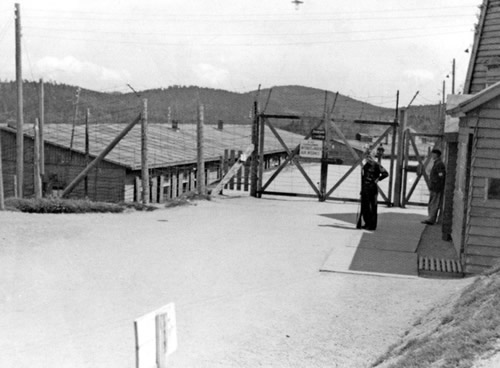 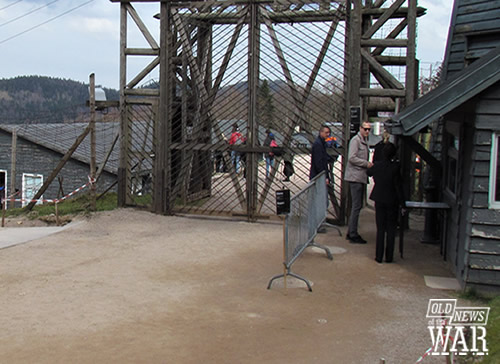 Another angle of the field entrance gate. The small building that used to be a guardhouse, is currently used as a ticket booth.
Old Photo: Jean-Marc Dreyfus 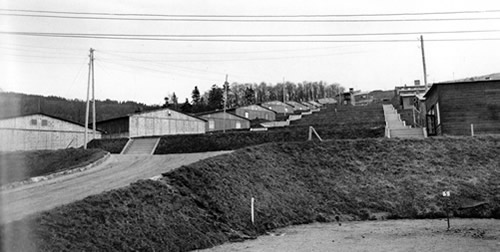 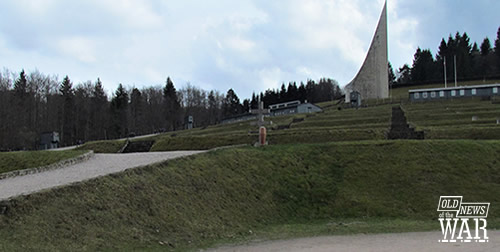 Photograph of the Natzweiler-Struthof - 1944.
After this photo, all the barracks in the camp, except the one on the right side at the top of the slope, were burned in an attempt to eradicate diseases. Today, only its concrete foundations remain in view. In May 1976, the only surviving barrack, which today houses the Museum of the camp, was almost completely destroyed by arson. It was rebuilt in a similar fashion to what it was before.
It is evident in the photograph of 2018, the monument built in concrete, to honor the victims.
Old Photo: Jean-Marc Dreyfus 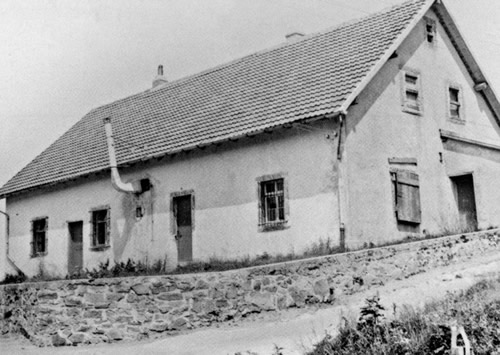 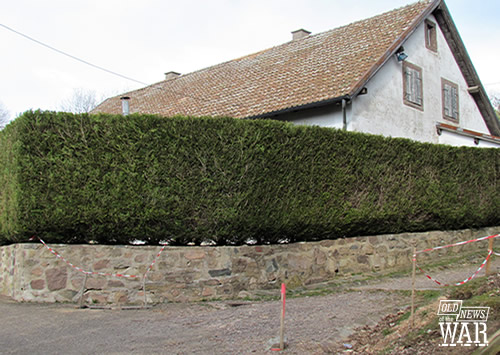 As of the summer of 1943, a gas chamber started to operate 2 km from the camp. It remains as it was during operating times. Due to the dense vegetation that surrounds it, it goes unnoticed by most people who pass by your door.
Old Photo: Jean-Marc Dreyfus 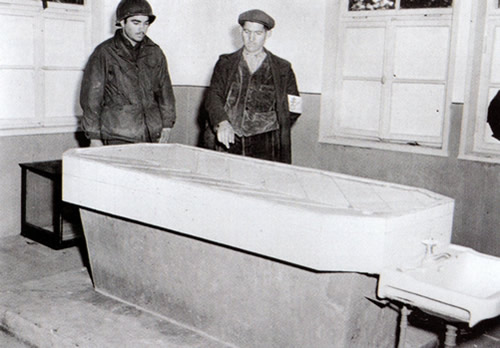 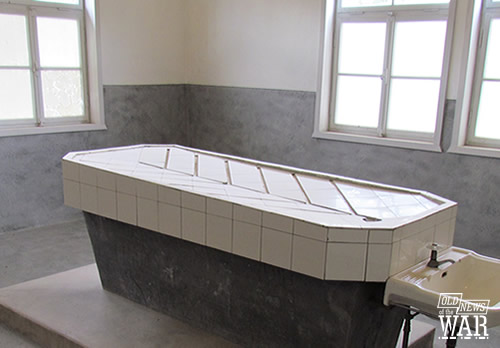 Many medical experiments related to the effects of mustard gas, typhus and hereditary diseases have been carried out in the field.
Doctors such as August Hirt (Professor of Anatomy at the University of Strasbourg), Eugen Hagen (Professor of Hygiene at the same university) and Otto Bickenbach, practiced numerous experiments and medical procedures, essentially inhuman and creamy, in the name of "Nazi Science".
The bodies of their victims were subjected to autopsy on the table built for this purpose in a room located in the same building as the crematorium. In the photograph taken in 1944, an American soldier and a member of the French Resistance appear.
The site is exactly the same as it was right after the camp was released.
Old Photo: Jean-Marc Dreyfus 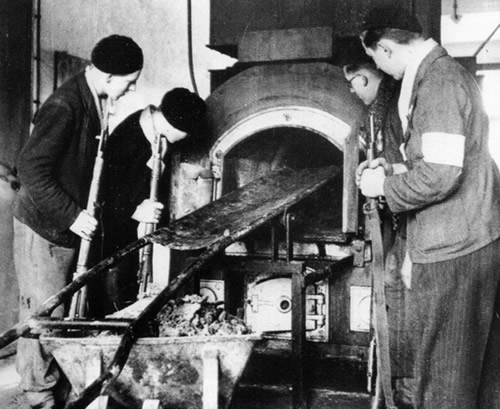 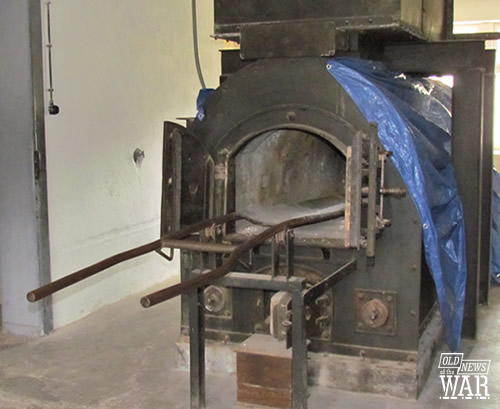 After the camp was released, armed members of the French resistance observed the crematorium in the barrack next to the prison.
At the time of the photograph taken in 2018, the crematorium was undergoing conservation work.
Old Photo: Jean-Marc Dreyfus 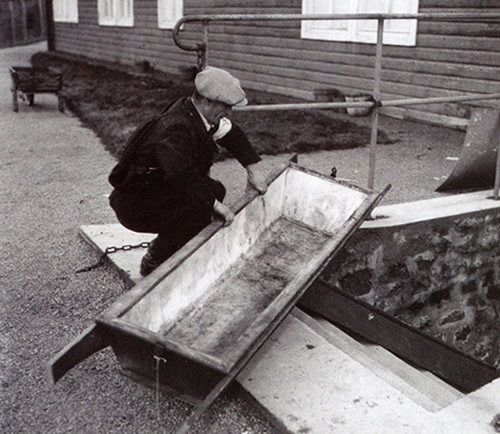 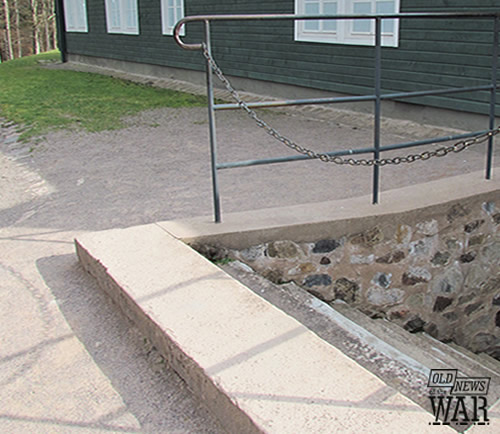 The bodies of prisoners killed in the camp by gassing, medical experiments, illness, abuse, hunger, cold, etc ... arrived at the crematorium barrack through this passage in the building's basement. They were temporarily stored in the basement until the moment of their cremation on the upper floor.
Jean-Marc Dreyfus 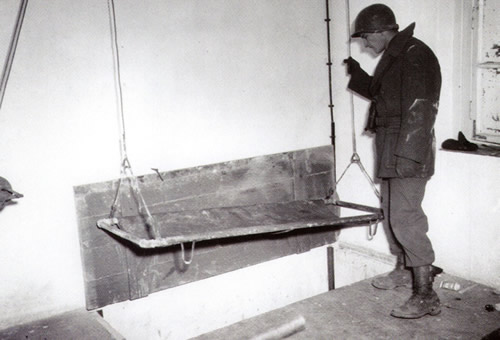 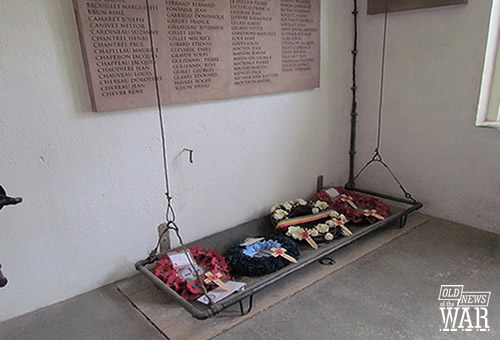 This was the elevator used to take the bodies stored underground to the crematorium room.
In the oldest photograph, a North American soldier examines the operation of the elevator. In the photograph taken in 2018, you can see that a plaque was installed on the wall. It recalls the names of 107 members of the "Alliance", a resistance organization, killed by the camp SS on the night of 1/2/44.
Old Photo: Jean-Marc Dreyfus 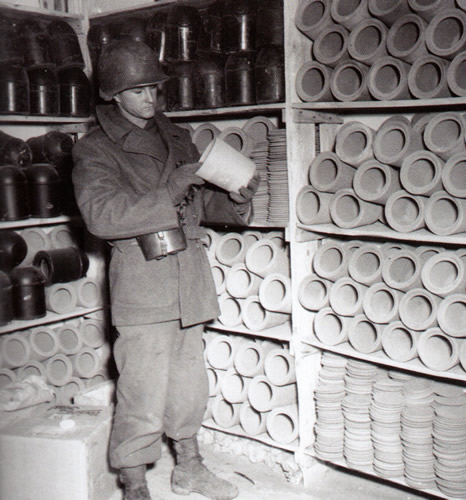 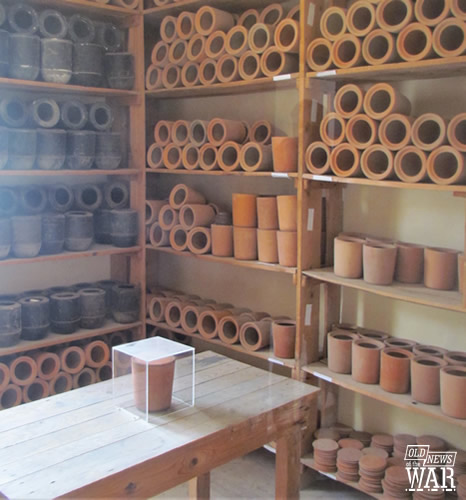 American soldier in the funeral urns room. Families of German-born prisoners executed in the camp could pay between 60 and 100 Reichmarks to receive the ashes, although there was no guarantee that the urn contained the ashes of their loved ones. This "courtesy" was denied to prisoners from other nations.
Old Photo: Jean-Marc Dreyfus